In today’s ever-changing world it is a remarkable milestone for a business to celebrate its 60th anniversary. But Kluger Furs, located in Flossmoor Commons on Vollmer Road, brings that distinction to Flossmoor.

Well known as a full-service furrier in the Chicago area, Kluger Furs draws customers from as far as Glenview to the north, and from Indiana and Michigan to the east. A recent customer came from Missouri. He had ordered a custom coat online and drove to Flossmoor to pick it up at the store. 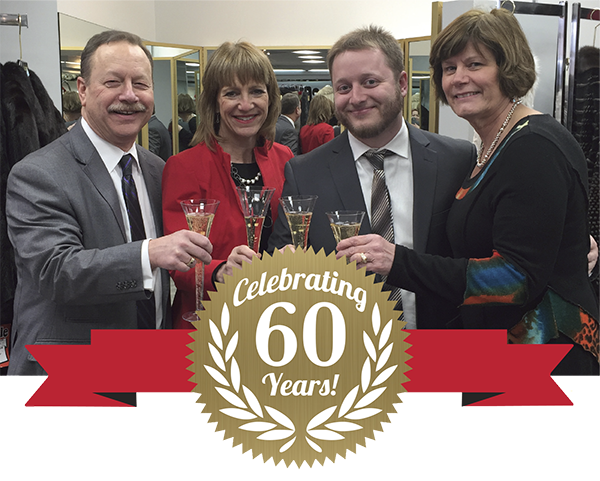 “We have many repeat clients and we are now seeing children and grandchildren from those clients,” said Sue.

Stepping through the doors of Kluger Furs is an exhilarating experience whether you are just browsing, making a purchase, or retrieving your fur coat from storage. Visitor’s eyes are drawn to racks and racks of colorful fur and leather coats, jackets, hats, scarves, and handbags.
Today’s beautiful store is a stark contrast to the early lives of its founders, Larry’s parents, Rudi, and Ruth Kluger. In 1938, they both escaped to England from the atrocities in their home countries; Rudi from Germany and Ruth from Austria.
“My mother was only 18 when she escaped to England. Her entire family perished in the Holocaust,” said Larry.
His father, a master furrier, was arrested in Munich at age 19 and spent six months in forced labor at Dachau and six months at Buchenwald where he built the camps. When he escaped to England, he was detained for nearly two years as an alien enemy refugee.
Rudi and Ruth met in England during the Blitzkreig attack and eventually married. In 1948 they got to America, traveled to Chicago and Rudi was able to apply his experience as a furrier with the Himmel Fur Company for many years. Ruth was also employed there as a seamstress.

In 1953, they moved to Homewood. While working with Himmel, Rudi began making fur coats in his home and advertised his business, which opened in 1958, in the community newspaper, The Star.
As his business grew, he built an addition on his Homewood house that became his workshop. He and Ruth had planned to stay in Homewood and grow their business but his health issues prevented his building a separate building. Consequently, as the business continued to grow, they decided to keep operating out of their home. The business remained in Homewood for 30 years. Rudi passed away in 1973 and Larry joined his mother in the family business.
Sue and Larry met in 1974 and married five years later. After their first child was born, Sue left her career as a court reporter and joined the family business.
“She brought our business into the computer age,” Larry said.
Kluger Furs moved from Homewood into Flossmoor Commons in 1989 to a 3,700 square foot space. Their son, Jordy, joined the staff. And last year, they expanded their space to 8,000 square feet by taking over two additional storefronts.
At the ribbon-cutting ceremony for the expansion in 2017, Flossmoor Mayor Paul Braun said, “Kluger Furs is one of the most iconic businesses in Flossmoor and we are happy to celebrate their expansion. Larry and Sue are wonderful community partners.”
As for their future plans, Larry said, “We want to continue serving our loyal customers and bringing in more forward-thinking fashion designers. We want to be a part of contributing to the growth of our community.”
He added that, most importantly, they want to continue the legacy that Ruth and Rudi Kluger began so many years ago.
Reprinted from the Homewood-Flossmoor Chronicle, written by Sharon L. Filkins.